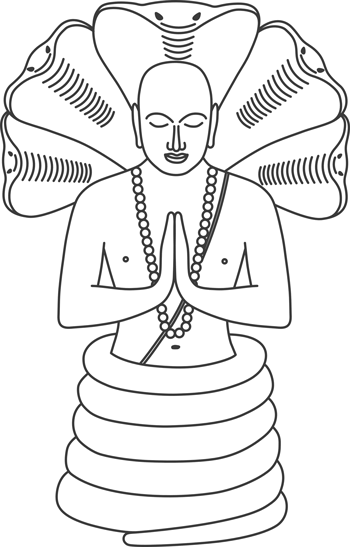 Patañjali's approach to yoga is based upon the foundation of Sāṃkhya - a philosophical viewpoint in which reality is perceived in terms of puruṣa - pure consciousness - and prakṛti - matter. Puruṣa is having an experience of prakṛti but has forgotten itself and has identified with matter. Our busy minds, bodies, and lives in the material world are all manifestations of prakṛti, and as such, subject to range of external influences. The practice of yoga is a process by which puruṣa - source consciousness - disentangles itself from the web of prakṛti and instead resides in peaceful essence.

When puruṣa consistently rests in itself, this state is known as samādhi. Patañjali offers two methods by which to calm the mind and to create the right conditions for an experience of samādhi to arise: kriyā-yoga - the yoga of action; and aṣṭāṅga yoga, - the yoga of eight limbs.

Approximately 2000 years ago, an Indian sage named Patañjali composed an important treatise on yoga named The Yoga Sūtra. The word sūtra can be translated as 'thread' and the Yoga Sūtra comprises a series of 196 aphorisms: short, compacted verses rich in meaning.

At the beginning of the Yoga Sūtra, Patañjali identifies yoga as the “stilling of the waves in the mind,” and the subsequent experience of abiding in one's “essential nature.” In the second chapter (pādah), Patañjali outlines two practical methods for the realisation of yoga: kriyā-yoga - the yoga of action; and aṣṭāṅga yoga, - the yoga of eight limbs.

Kriyā yoga is presented as the observance of certain activities & attitudes which remove obstacles and help to create the right conditions for the experience of yoga to arise. Patañjali describes three observances - niyamas as being vital to progress: tapas, svādhyāya, and Īśvara-praṇidhāna.

Kriyā-yoga - three niyamas - click on each item to expand:

Tapas is the development of self-discipline. When we transcend our own, self-imposed limitations in the pursuit of a higher goal then this is tapas. For example, if I resolve that I’m going to get up every morning at 5am and meditate for 30 minutes, at some point my mind or body, or both will rebel: surely its much easier to stay in bed and rest. However, when I override  these impulses, when I get up and do the practice anyway - this is tapas. Tapas is a fire that burns and cleanses us of sloth, ineptitude and negativity. Many Nātha yogis in India make tapas their main practice with some performing extreme feats of endurance in the pursuit of siddhis - powers. Tapas can be thought of as the development of will-power. When we build will-power we become stronger and more powerful. In time, we can accomplish things that may once have seemed impossible.

Svādhyāya is usually interpreted as ‘self-study’. That study could take the form of reading spiritual texts: like the Bhagavad Gītā or the Yoga Sūtra. It could also take the form of deep enquiry into the nature the self: asking big questions like ‘who am I?’ For some, svādhyāya takes the form of reciting mantras. All of these practices are signposts that point in the same inward direction: they encourage us to reflect deeply upon our own essential, eternal nature.

Īśvara-praṇidhāna means surrendering ourselves to ‘Īśvara’ - the highest.  Patañjali doesn’t specify the nature of highest - making the practice accessible to atheists and non-atheists alike. To some, Īśvara means God, in whichever form their belief system interprets that concept. For others, who don’t have a faith, it may be a recognition of the infinite magnitude of the universe. When faced with the raw power of nature: the view from a mountain peak, the waves crashing in a storm, or a beautiful sunset on the beach; we are humbled and experience a sense of being a part of something much greater than ourselves. This is praṇidhāna - surrender. When we acknowledge our relative smallness in relation to the whole, we begin to let go of our ego and our own self-importance. In so doing, we experience a greater sense of connection with the whole.

Patañjali writes that if we practice these three components of kriya yoga then obstacles will be overcome and we will experience samādhi - clear perception.  Our consciousness will be purified and we will experience new clarity.  Yoga is the transformation of a distracted mind into a focused mind. Kriyās are the transformative actions that clear the way: ridding us of mental as well as physical detritus so that we can experience greater happiness and well being.

A simple way to begin practising kriyā-yoga is to set aside a little time in each day to walk in nature. If you live in a city it could be a circuit of the local park on the way to work. The commitment to complete the walk and to physically move - builds tapas. During the walk we can chant a mantra or reflect on the self - svādhyāya. All the while, we are absorbed in nature, surrendering to Īśvara - the highest. In this way, it is possible for even the busiest person to integrate yoga into their daily routine and to have an experience of samādhi.